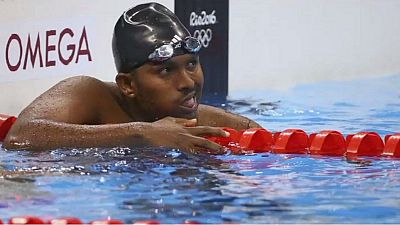 After being ridiculed because of his body shape in the recently concluded Rio Olympics, Ethiopian swimmer Robel Kiros Habte has not given up on his swimming career.

Critics took to social media to lambaste Habte for being chunky in his mid section, with some saying that he only qualified because his father is the president and founder of the Ethiopia Swimming Federation.

“All the criticism on the social media did not weaken me. I am in fact even stronger now. I represented my country is in swimming. In fact, I am training hard now to show the whole world and those people on social media what I can do. That is why I am training so hard,” he said.

He says he is using his experience from Rio to fuel his training for the World Swimming Championships in Canada, scheduled for December.

Habte trains six days a week for more than five hours each day and spends extra hours running and weight training at the gym.

“We will shut the mouths of those people on social media…The experience in Rio served as a source of determination for him, for his father and for us, his coaches,” said Zewudu Bekele, Habte’s swimming coach.

Habte plans to fly his country’s flag along with his compatriots at the next Olympics in Tokyo. But first, he has set his sights on redeeming himself in Canada.

The 24 year-old also plans to start a swimming foundation for young people in a country where long-distance running takes centre stage.