Business leaders, digital developers and social innovators from across the continent are meeting in Paris for a meeting aimed at boosting investment and sustainable growth.

France is hosting the two-day gathering in Paris called ‘Les Recontres Africa’ which brings together hundreds of both established and start-up entrepreneurs with dozens of key politicians.

Sentiments shared by Alexandre Maymat, head of France’s ‘Societe Generale’ bank in Africa. He believes the continent is at the forefront of innovative banking; development that could drive African economies into pole position within a decade.

“I can see Africa is more integrated globally because despite the current fluctuation in terms of production of raw materials, it will still remain important with increasing world demand and population growth. I can see Africa being ahead in ten years because it will steer many economically developed countries,” Alexandre Maymat told Africanews.

The organisers say the gathering is also a crucial forum for networking which they hope will lead to the creation of thousands of new jobs. 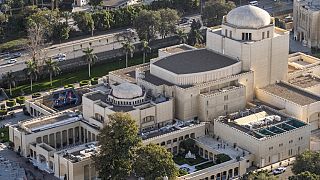