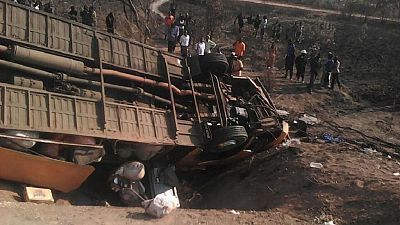 Zambian president Edgar Lungu has expressed worry over two accidents that claimed 25 lives and injured over 40 others on Friday.

The president who is currently in the United States for the upcoming United Nations (UN) General Assembly, wrote on his facebook wall that he was distressed by the unfortunate development.

‘‘I received with deep distress, news regarding the loss of 25 Zambian lives as a result of an accident while several people got injured,

I received with deep distress, news regarding the loss of 25 Zambian lives as a result of an accident while several people got injured.

‘‘The frequency of road fatalities on the Zambian roads are a deep concern to the government and myself. Solutions will be found to curb this trend on my watch I promise you that. I want to see an end to this senseless loss of lives,’‘ he added.

The first accident according to a police statement killed 22 people while 48 others sustained injuries when a Power Tools, Scania bus crashed at the Serenje turn off when the bus driver failed to negotiate a curve due to excessive speed.

The bus was carrying 70 passengers from Nakonde (in the Muchinga) district and was heading to Kitwe in the Copperbelt region when the incident occured.

Three officers who were conducting a rescue operation at the scene of the accident were also killed while six police officers sustained injuries after they were hit by another truck.

The second driver also failed to break as he approached the accident scene resulting in the maize-loaded truck impacting a tow truck which was parked at the scene of accident.

The second driver however fled the scene of the accident and the police have mounted a search to arrest him. The police said they are yet to propose to government to ban public transport vehicles from moving at night so as to avoid occurrences of such accidents.