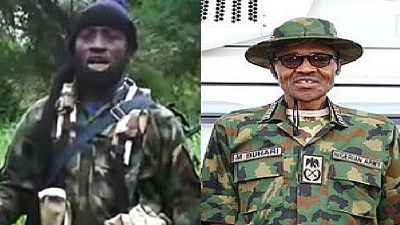 The 13 minutes video was posted on youtube on Tuesday. According to the group, it was to show that they were still a potent force.

In an address after the Eid prayer, the gun wielding leader stated that he was representing Abubakar Shekau. He called president Buhari an ‘infidel’ and vowed that Boko Haram was going to continue their war against Nigeria.

By the will of Allah under the leadership of our leader (Shekau) will capture Buhari with our hands.

“This is our eid prayer from us and by the support of our leader Imam Abubakar Al-Shekau. We are extending our greetings to our people and fighters.

“Message to the infidels and the leader of the entire infidels (kafir) who is the President of Nigeria, Muhammadu Buhari, that he should know we are very strong and doing very good.

“By the will of Allah under the leadership of our leader (Shekau) will capture Buhari with our hands,” the group said.

The new video comes exactly a month after the sect released a similar one which showed a number of the abducted Chibok girls. The spokesperson in that video requested the government to release ‘their brothers’ – i.e. Fighters in jails across the country.

According to him, that was the only condition under which they will release the much sought after Chibok girls. In their last video, they tasked parents to put pressure on the government to release their fighters so that the girls will also be returned.

The Army declared three persons wanted in connection with the last video. According to the army, the three persons had links to Boko Haram and were needed to assist with vital information on how to rescue the Chibok girls.