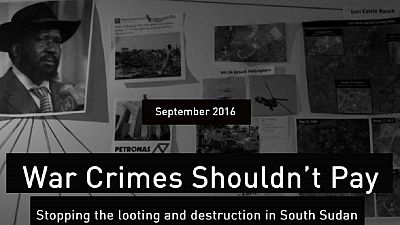 An investigative report on the conflict in South Sudan has disclosed that the country’s main political players and top military officials have benefitted financially from the war. The report is titled “War Crimes Shouldn’t Pay – Stopping the looting and destruction in South Sudan.”

What are the major findings of the report?

Who are the investigators?

The Sentry is a Washington DC-based investigative group, according to their website, they seek to disrupt and ultimately dismantle the networks of perpetrators, facilitators, and enablers who fund and profit from Africa’s deadliest conflicts. This is their first report on a conflict.

Prendergast: We want to change people's calculations on whether or not to commit atrocities because we'll be going after their wallets

Prendergast: As long as South Sudan's war remains profitable to its leaders, peace will be elusive

Clooney: A president and vice-president are profiting from atrocities against their own people. “The evidence is pretty damning.”

Who were the targets of the investigation?

The investigation focused on top officials identified by the United Nations (UN) and African Union (AU) as having command authority over military operations and whose actions resulted in widespread human rights crimes since December 2013. They include:

Who did The Sentry fund to probe the South Sudan conflict?

Actors George Clooney and Don Cheadle joined The Sentry co-founder, actor and activist, John Prendergast to undertake the investigation over two years following the money trail. They presented the findings during a news conference at the National Press Club in Washington, U.S.