US announces $146 extra humanitarian funding for Kenya and Somalia 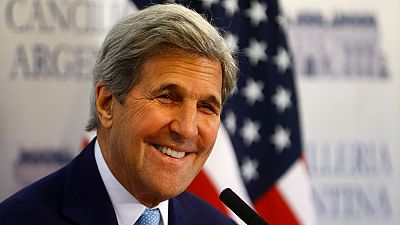 The United States (US) has announced extra humanitarian funds to Kenya and Somalia. The assistance shall be in the areas of Somali refugee support and also to help drought victims in both countries.

This was announced by the US Secretary of State, John Kerry, in the Kenyan capital, Nairobi, during his one day visit where he met with President Kenyatta and with security chiefs to discuss terrorism in the Horn of Africa region.

According to the US, the new funding allocates over $59 million for the Office of the UN High Commissioner for Refugees (UNHCR) to protect and assist refugees in Kenya, and support voluntary refugee returns to Somalia.

UNHCR is committed to ensuring that all returns to Somalia are voluntary and carried out in dignity, safety and with the protection of refugees paramount at all times.

The remaining $87 million would be channelled into food and non-food support for refugees and drought victims in Kenya and Somalia. With this latest contribution, the total of U.S. humanitarian assistance to both countries in 2016 rises to nearly $265 million.

The UNHCR in July this year appealed for extra funds from its donors to aid its humanitarian work with respect to the closure of the Dadaab refugee camp in Kenya.

The UN agency said it needed in excess of $115m to fund the voluntary return and reintegration of Somali refugees in the the world’s largest refugee camp. They had earlier appealed for $369m for what they referred to as the ‘Somali situation.’

The amount they were seeking were to be used for the following:

“UNHCR is committed to ensuring that all returns to Somalia are voluntary and carried out in dignity, safety and with the protection of refugees paramount at all times,“ UNHCR’s Africa Bureau boss Valentin Tapsoba said.