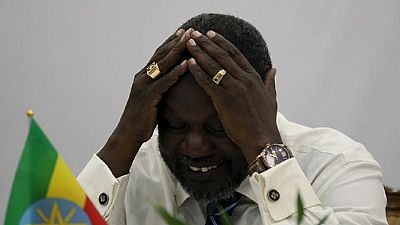 The location of the former rebel leader and former South Sudanese First Vice President, Riek Machar, has been given out as the Democratic Republic of Congo after a statement released on Wednesday confirmed he had left South Sudan to a safe country.

Farhan Haq, a United Nations spokesman said on Thursday that Machar was helped during his evacuation by the UN Mission in the DRC (MONUSCO) before he was handed over to the Congolese government.

“MONUSCO was informed yesterday (Wednesday) of Machar’s presence in the DRC and the Congolese authorities requested MONUSCO to facilitate his evacuation and transfer. He was handed over to the authorities of the DRC,” Farhan Haq said.

MONUSCO was informed yesterday of Machar's presence in the DRC and the Congolese authorities requested they facilitate his evacuation and transfer. He was handed over to the DRC authorities.

He added that the operation took place near the South Sudan border was for humanitarian reasons and with Machar’s consent.

“We provided the medical help he needed,” he said without giving further details.

On the actual location in the DRC, Haq said the UN does not know exactly where but they believe “he is not in Kinshasa”.

Earlier, a senior member of Machar’s party, SPLM-IO, had told AFP that the former rebel leader was “in Kinshasa and wanted to move quickly to Ethiopia where he would give a press conference”.

Machar left Juba after renewed clashes between his forces and those of President Salva Kiir claimed over 300 lives and led to the fighters loyal to the former rebel leader fleeing the city. The fighting has resulted in a humanitarian crisis with people abandoning the city for fear of a return to war.

President Kiir relieved Machar of his post as vice president and appointed the Mines minister, Taban Deng Gai as first vice president in the interim government.

Taban Deng is a former chief negotiator of the SPLM-IO in the August peace deal, which was being brokered by the IGAD-Plus countries.

Deng on Wednesday advised Riek Machar to stay out of the political affairs of the country to enable the implementation of the peace agreement.