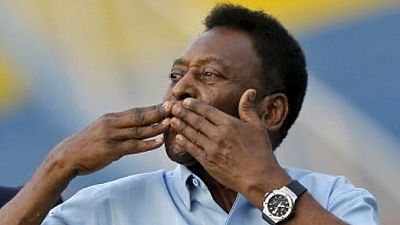 Brazil and world football legend, Pele, has revealed on Tuesday evening that he would be participating in the closing ceremony of the ongoing summer Olympics in Brazil.

His message posted on micro blogging platform, Twitter, read “I am continuing my physiotherapy and focused on joining you for the closing festivities on August 21. I love you! Olympics”.

The ailing Brazilian sport hero was absent at the opening ceremony of the Olympics and there was talk about the organizers doing all it took to get him at the closing ceremony.

I am continuing my physiotherapy and focused on joining you for the closing festivities on August 21. I love you! Olympics.

I want to thank everyone for the well wishes from around the world, regarding the #olympics #openingceremony pic.twitter.com/hzo2CqTxdX

The 75-year-old who never took part in any Olympics recently released a song for the Games titled “Esperança” which a proud Pele said was dedicated to his country, Brazil.

Pele has spoken fondly about his inability to add an Olympic medal to his trophy cabinet, he never competed in an Olympics because professional players were barred during his days.