Kabila finally speaks on DRC polls, says it will depend on availability of register 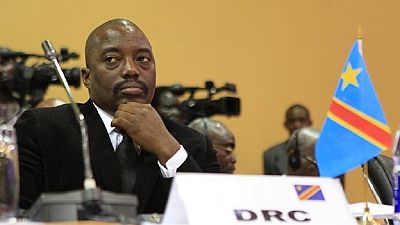 President of the Democratic Republic of Congo (DRC), Joseph Kabila, says the country would hold elections when a voters register is available. His first comments on the issue of elections following opposition accusations he wants to stay beyond his tenure.

The DRC leader whose government is under local and international pressure to organize elections stated that there was a false perception that the country would not be able to organise general elections.

“We have organised elections on two occasions. Elections are organised by an independent Electoral Commission. In order for them to be organised, we need a voters register and registration,” Kabila during a media interaction whiles on a visit to neighbouring Uganda.

We have started voter registration. It will take time but as soon as the voters register is available, we shall have an election.

“We have started voter registration. It will take time but as soon as the voters register is available, we shall have an election,’‘ he added.

Kabila is not eligible to stand in the next elections but there are concerns in the ranks of the opposition that he is doing all it takes to stay in power beyond his mandate.

Veteran opposition leader, 83-year-old Etienne Tshisekedi returned to the country after two years of treatment in Belgium to lead the local call for elections to be held without Kabila.

Another opposition figure Moise Katumbi, left the country for medical treatment but is expected back despite threats to be jailed. Katumbi was found guilty in absentia in a property appropriation case and handed a four year jail term. His lawyers have described the charges as a political witch-hunt meant to derail their clients’ presidential ambitions.

Kabila has been in power since 2001, and is constitutionally bound to step down after serving two terms, after winning 2006 and 2011 elections. The country’s highest court ruled in May that Kabila could remain in power until the next election is held.

In March, the Security Council called on the country to organize elections this year, but the government says logistical and budgetary obstacles make it unrealistic. The election commission has said it needs more than a year to update voter rolls.

The government has however contracted Gemalto, a world leader in the area of digital security to help the electoral body with 22,000 mobile biometric voter enrollment kits.