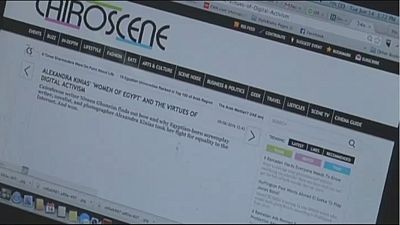 When it was first launched in 2011, CairoScene was no more than an online calendar, advertising local events in the Egyptian capital.

But today, the publication has branched out to become a comprehensive online magazine – and its popularity has soared.

Established by four siblings who were born and raised in the United Kingdom, CairoScene covers a wide range of subjects.

“ From day one, we went in and said ‘there’s no topic we won’t cover’. And we always give one opinion and the other opinion,” said Amy Mowafi, the co-founder and CEO of MO4NETWORK, the media agency which manages CairoScene.

Mowafi, who returned to Egypt in 2002 after graduating from university, began the venture with her siblings in a modest room in her flat in Cairo, before moving to an office.

The company now employs around 150 people, including about 25 editorial staff.

Mowafi said tackling a wide variety of issues, even ones seen as taboo in Egypt’s conservative society, was one of the company’s main aims.

“I’m not the one who created the controversial issues – they’re already present in society. I just just put the spotlight on them. But one of our policies, not just as CairoScene but as an agency, is to be fearless,” she said.

The online publication has covered topics such as domestic slavery, prostitution and sexual harassment.

And Mowafi said that unlike the country’s more traditional publications, CairoScene made use of multimedia formats to reach out to a wider, and younger, audience.

Despite CairoScene’s success, the Egyptian government has been accused of creating a hostile environment for the country’s journalists.

Reporters Without Borders says media freedoms are frequently violated, and that Egypt has the fourth highest number of journalists in prison, after China, Eritrea and Iran.