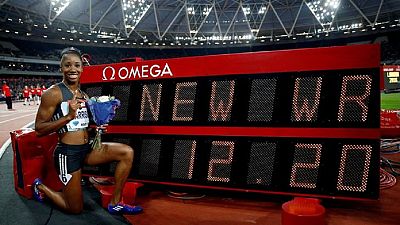 American hurdler, Kendra Harrison on Friday night became the world’s fastest woman, breaking a 28-year-old record in the women’s 100m hurdles in 12.20 seconds at the Diamond League meeting in London.

Harrison broke the record set by Bulgaria’s Yordanka Donkova in 1988 – 4 years before she was born – by one hundredth of a second.

Having missed out on a place in team USA for the Rio Olympic games, Harrison collapsed on the track in tears after her record time appeared on the clock.

“Yes, this is one of the greatest nights of my life. I’m just really happy and all the glory goes to God,” she later told reporters.

“To get back up after you ran slow, you know, you’ve got to do that and I did that and I’m just really happy.”

Asked if she had mixed feelings about not qualifying for the Olympics, the new world record holder said: “Yes. Yes. Of course, I still feel well down about not making the team but I didn’t give it my best that day and it showed. So, I came out here today to make myself feel better.”

The 23 year-old who came in sixth in a competitive US trials produced the performance of the night saying she was “really upset” about not making it to Rio “and wanted to come here and show what I could have done”.

The clock initially showed 12.58 seconds when Harrison crossed the line, far ahead of the field. But her finished appeared much quicker and was corrected to 12.20 seconds, one hundredth of a second faster than Donkova’s record 12.21 seconds.

She picked up a cheque for $50,000 for hew new world record, a record she says she intends to break before the season is over.

Usain Bolt who has been nursing an injury struggled for his usual rhythm as he swept to victory in 19.89 seconds in the 200m event.

.usainbolt blasts back to fitness at #LondonDL

He had pulled out of the 100m final in the Jamaican trials last month with a hamstring strain.

“I think I’m pretty satisfied. It wasn’t the best of my best but it was my first one (of the year), so I’m cool with that. I know I have to listen to what my coach has to say, what we need to work on and I’m going to Rio now, work on that and push myself,” Bolt told Reuters.

“The time is bad, but I won; it’s very important before Rio. Now, I prepare. The race is in two weeks and I’ll see you in Rio,” Vicaut told Reuters.

Shaunae Miller of the Bahamas on the other hand was impressed with her victory of 49.55 in the women’s 400m race as she gets ready for Rio.

“To get a PR out of it that’s really nice but you know we still made a few small mistakes in the race but, you know, we can put it together in time for Rio but I’m excited for it. Things are looking extremely well for me. We’re excited for Rio; we’re excited to see what we can do.”

Frenchman Renaud Lavillenie who is the Olympic champion in the men’s pole vault event, maintained his dominance clearing the bar at 5.90m.

He was excited about his victory as he “was not feeling in shape because I’ve been ill the last few days” but he said “being able to adjust everything and be able to jump really high” was interesting as he prepares for the Rio games.