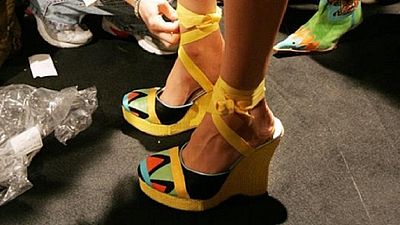 An Egyptian architect is shifting her focus to making shoe designs. Jayda Hany is using her background in building design to create futuristic footwear.

The 26-year-old Egyptian who studied footwear design at the London College of Fashion after graduating from the American University in Cairo in 2012 is making it big.

“The more I learnt about footwear design, the more I discovered that there isn’t a big difference between architecture and footwear design. The whole idea is that one is done on a small case, while the other is done on a large scale, buildings, but the design process is the same. It’s that same idea of structure and weight and whether something can withstand or not, but on a smaller scale and using different materials,” Jayda Hany said.

Still growing, Hany is exploring the Egyptian production scene, from factories to workshops, and is keen to keep it local.

Top of her priority clientele list are major celebrities with stylists look for bespoke products.

“The leather we have in Egypt is what they export to Linea Pelle in Italy. Linea Pelle is the largest leather fair in the world, and I’ve discovered that this leather is not Italian, it’s imported from Egypt. The plastic and injection and all of that is also done in Egypt. We have shoemakers in Egypt, whose experience and skills are like those of anyone else abroad. So, I thought if something is available here and is cheaper to an extent, why not produce it in Egypt?” she added.

In the near future, Hany hopes to set up a studio to cater for the growing base. Part of that dream is to be able to take part in the London and New York Fashion week events.