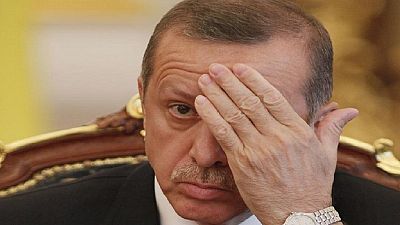 Turkish president Recep Tayyip Erdogan has condemned what he calls an “uprising of a minority within the army” and has called on the Turkish people to hit the streets and protest the supposed coup, according to Turkish television.

Erdogan appeared on a private TV channel claiming that the coup would be resolved and those behind it punished. He is currently in the resort town of Marmaris and told the media that he was returning to Ankara.

The embattled leader who insisted that he was still in charge of the country took to Twitter to invite members of the public to hit the streets, city centers and occupy the airport, ostensibly to defend democracy. Local media reports that parties have asked their supporters to come out and protest.

We will not hand over this democracy without giving our last breath.

Other reports say Erdogan appeared on television through a facetime video connection to CNN Turk to address the nation at a time the coup threatens to topple the government.

Incidentally, there were reports that social media had been blocked in the country in the wake of the coup. Reuters reports that the military have taken over the state broadcaster and announced the imposition of martial law. The Ataturk airport has also been closed to air traffic.

Meanwhile Turkey’s European Union minister Omer Celik has urged soldiers not to obey the orders of a faction in the military attempting to carry out a coup, according to NTV. ‘‘We will not hand over this democracy without giving our last breath,’‘ he charged.