Hundreds of African migrants are currently stranded in Costa Rica after they were denied into Nicaragua.

They have been forced to live in deplorable conditions in make shift camps in Penas Blancas, on the official border crossing into Costa Rica , after Nicaraguan authorities refused to open up their borders.

The migrants final destination is the United States .

Right now we are about 3,000 of us and more are still coming so if they don't open the border we will stay here forever

“Right now we are about 3,000 of us and more are still coming so if they don’t open the border we will stay here forever”, said a Congolese migrant.

Despite the hazardous journey, many have been forced to pay human smugglers large sums of money to reach Central America, in the hope of reaching the US.

There are are fears that the influx of the migrants could lead to a humanitarian crisis, but, Nicaraguan authorities have maintained their hardline stance.

The Costa Rican Red Cross estimates that about 2,000 migrants most of whom are from Africa and Asia, are in the country in the hope of eventually pursuing the American dream. 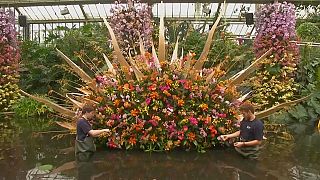