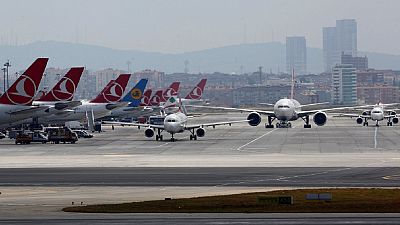 Media sources report that television footage from inside the airport showed check-in lines functioning normally. Turkish Airlines, the country’s flag carrier, also said that its flight operations had resumed, though the airport’s arrivals and departures board showed heavy cancellations and delays.
Embed from Getty Images

The International Arrivals section in the lower part of the airport, where the attacks occurred on Tuesday at around 9:22pm local time, remained closed as security operations, damage assessment and cleaning operations were taking place.

There was no immediate claim of responsibility, but Turkish Prime Minister Binali Yildirim said early evidence pointed to an attack by Islamic State extremists, whom he identified by the Arabic pejorative “Daesh.” He called the attack “cowardly,” and vowed his country will continue to press its fight against extremism.

The attack bore similarities to a suicide bombing by Islamic State militants at a Brussels airport in March that killed 16 people. A coordinated attack also targeted a rush-hour metro train, killing a further 16 people in the Belgian capital.

Two U.S. counter-terrorism officials familiar with the early stages of investigations said Islamic State was at the top of the list of suspects although evidence was still being gathered.

The officials, who spoke on condition of anonymity, said the use of suicide bombers against “soft” targets was more typical of Islamic State than another suspect, Kurdish PKK militants, who generally attack official government targets.

The United States said it stood in solidarity with Turkey, its NATO ally, and that such attacks would only reinforce their joint determination. United Nations Secretary-General Ban Ki-moon stressed the need to intensify global efforts to combat extremism.

Ataturk is Turkey’s largest airport and a major transport hub for travellers from around the world. A helicopter buzzed overhead as police evacuated the building. Dozens of passengers walked back down access roads with their luggage, trying to hail cabs. The U.S. embassy urged U.S citizens to avoid the area.