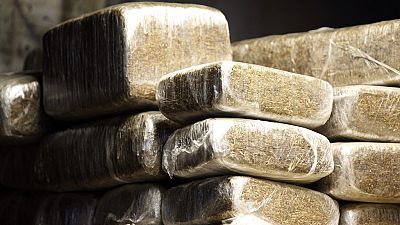 French and Spanish customs have seized a Sierra Leone flagged ship on the Mediterranean carrying 2.1 tonnes of cannabis resin concealed in a secured cache.

The bust conducted on June 17 adds up to the 5.4 tonnes of cannabis resin seized in a series of joint French and Spanish customs operations between June 15 and 25 in the Mediterranean, French customs said in a statement on Monday.

Seven people were arrested in total.

The 5.4 tonnes of cannabis resin is valued at 32.6 million euros on the illicit drug market.

“On June 17, the French customs coastguard service together with the Spanish customs patrol teams arrested a ship flying the flag of Sierra Leone in the Mediterranean and seized 2.1 tonnes of cannabis resin concealed in a secured cache,” the statement said.

On June 22, the Spanish coastguards again seized 720 kg of cannabis resin on the La Atunara (Andalusia) beach, after a pursuit by French and Spanish speedboats.

Finally, on June 24, the French and Spanish patrol hunt arrested a boat spotted by the French air team and recovered 570 kg of cannabis in bundles thrown overboard by traffickers, it added.