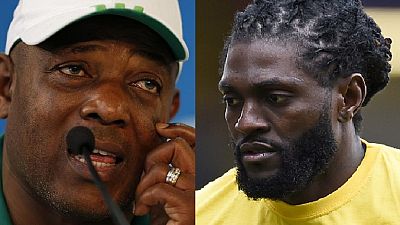 Emmanuel Adebayor, captain of the Togolese national team is the latest to pay tribute to Nigerian footballer and coach, Stephen Keshi, who died at the age of 54 earlier this month.

Adebayor was speaking after partaking in a memorial game organized in memory of the former coach of the Hawks on Sunday, June 19, he described Keshi’s death as a “great loss to African football.”

“I knew Keshi when I was very young. He taught me a lot in my career. His death is a great loss to African football,” Adebayor told AFP.

I knew Keshi when I was very young. He taught me a lot in my career. His death is a great loss to African football.

The out-of-contract Adebayor was part of the team Keshi coached to reach the Togo’s historic appearance at the World Cup, even though the Nigerian was replaced before the Hawks enplaned to Germany.

“Keshi is a man I will never forget. He taught us about discipline in the squad and he made us a force at the time,” added former Togo captain Jean-Paul Abalo Dosseh.

Keshi, also a former skipper of Nigeria, is one of the few sportsmen to have won the Africa Cup of Nations as a player in 1994 and coach in 2013.

It is estimated that about 8,000 fans watched Sunday’s game which began with a rousing minute’s applause in honour of Keshi, who died on June 8.

Even though Keshi coached Togo to the 2006 World Cup but was sacked on the eve of the competition, he returned briefly to the job in 2010.