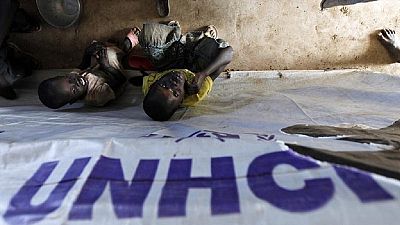 The United Nations refugee agency (UNHCR) said it was building a new site to reduce overcrowding in the Kakuma refugee camp in northern Kenya, to house refugees fleeing nearby South Sudan.

The announcement comes at the backdrop of Kenya’s recent decision to close the world’s biggest refugee camp, Dadaab saying it posed an existential security threat to Kenya.

Already home to nearly 200,000 refugees, Kakuma has seen the arrival of some 44,000 South Sudanese refugees since late 2013, when fighting broke out between forces loyal to President Salva Kiir and rebels allied with current first Vice President Riek Machar, stretching the camp to its limits.

For civilians life continues to be very, very tough. Once peace is achieved development will continue to be a big challenge in a country that has almost no infrastructure.

“This is really a new way of working for UNHCR, that does not simply provide care and maintenance and day to day survival of the refugees, but we want to establish a more long term sustainable model that can benefit both the refugees and the local community,” he said.

The Kalobeyei settlement being built, would follow a new model where refugees share services, farm the land and businesses with the local population.

UN officials said permission to extend Kakuma came with conditions attached, based on greater cooperation between refugees and the community.

The United Nations has replaced some of the food aid ration with cash so that local businesses can sell their products to the refugees.

“For civilians life continues to be very, very tough. Once peace is achieved development will continue to be a big challenge in a country that has almost no infrastructure,” he added.

Kenya hosts the second largest number of refugees on the African continent, some having arrived as long as 25 years ago. Legally, all refugees must live in camps and they cannot work.

With limited funding for protracted displacements, the United Nations has repeatedly cut food rations for refugees in Kenya.

There have been tensions between poor locals living around the camps, who often suffer drought and hunger, and the refugees who receive free food, healthcare and education.