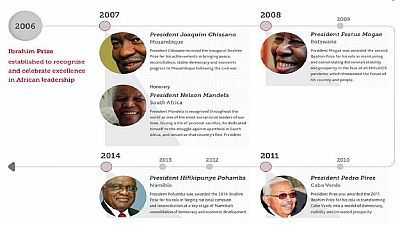 The Mo Ibrahim Foundation has announced that there is no winner for the 2015 Ibrahim Prize for Achievement in African Leadership.

The prize instituted a decade ago is to recognize “African leaders who have dedicated their tenure of office to developing their countries, improving the welfare and livelihoods of their people and paving way for sustainable development”.

Although the award scheme is ten years old, it cannot boast of at least 9 laureates.

“When we launched the Prize ten years ago, we deliberately set a very high bar. We want the Prize to shine a spotlight on outstanding leadership to provide role models right across society, as well as supporting Laureates to continue to serve the continent by sharing their wisdom and experience,” a statement from the Chairman of the Prize Committee read.

It appears the standards might be too high for continent’s leaders especially since it is awarded to leaders after their term in office. And with many more African leaders extending their stay in office, it leaves a very narrow pool of candidates.

Namibia’s former president, Hifikepunye Pohamba who served from 2005 to 2015, was the last recipient of the $5 million prize.

He was named the 2014 Ibrahim Laureate due to his contributions in consolidating his country’s democracy, stability and socio-economic development.

“During the decade of Hifikepunye Pohamba’s presidency, Namibia’s reputation has been cemented as a well-governed, stable and inclusive democracy with strong media freedom and respect for human rights,” the Prize Committee said on its website.

Mozambique’s former president, Joaquim Chissano was the first Ibrahim Laureate having won the prize in 2007 for his role in leading Mozambique from conflict to peace and democracy.

South Africa’s Nelson Mandela was made an honorary Laureate also in 2007.

Festus Mogae, Botswana’s president from 1998 to 2008 was the second recipient of the Ibrahim leadership prize. He was recognised for his role in maintaining and consolidating his country’s stability and prosperity.

“President Mogae’s outstanding leadership has ensured Botswana’s continued stability and prosperity in the face of an HIV/AIDS pandemic which threatened the future of his country and people,” the prize committee said about him at the time.

According to Kenya’s Daily Nation, officials of the Mo Ibrahim Foundation have explained that the lack of a winner last year was more indicative of the tough eligibility conditions rather than a sign of poor leadership on the continent.

“The tough criteria were deliberately set to ensure only the most outstanding would be considered,” the Daily Nation quoted Sophie Masipa, Head of Communication for the Mo Ibrahim Foundation as saying.

But Mo Ibrahim himself does not expect to get an outstanding leader win the leadership award every year.

In a February 2016 interview with Arabian Business, the Sudanese telecoms giant said: “When we launched the prize, we made it clear that this is not a pension, it’s not a birthright, it is a prize for excellence and excellence by its nature is rare, otherwise it would not have been excellence. And we will not shy away. We expect some year we will not find the right people to fill that.”

In that interview, he bemoaned the lack of “strong, clear leadership in Africa” citing an earlier mostly pre-independence leaders like Ghana’s Kwame Nkrumah, Egypt’s Gamel Abdel Nasser, Tanzania’s Julius Nyerere and South Africa’s Nelson Mandela and Thabo Mbeki who he described as “strong voices in Africa”.

“At the moment you look around you and you have a lack of such political leadership,” a development Ibrahim said was not limited to Africa alone.

A lecturer at the University of Ghana’s School of Communication Studies, Godwin Etse Sikanku thinks the lack of a winner “demonstrates a failure of leadership in Africa”.

“This was supposed to be Africa’s century” he said, “however, it seems Africa hasn’t been able to live up to the promise of tangible transformational leadership that could be a shinning example. Not the best report for a continent whose people face some of the harshest social and economic crisis” he adds.

Pedro De Verona Rodrigues Pires who was head of state for Cape Verde from 2001 to 2010 snatched the third Ibrahim prize in 2011 leaving a two year gap before Pohamba broke the void in 2014.

Pires was recognised for transforming Cape Verde into “an African success story” with the prize committee’s citation indicating it was “greatly impressed by President Pedro Pires’ vision in transforming Cabo Verde into a model of democracy, stability and increased prosperity”.

2015 may have failed to produce any winner, but the prize committee which meets on a regular basis to review eligible candidates says it has begun considering candidates for the 2016 Ibrahim prize.

The Mo Ibrahim Prize for Achievement in African Leadership comes with a $5 million prize money over ten years and $200,000 annually for life thereafter.

It is awarded to former African heads of state who left office in the last three years before the year of awarding, was democratically elected, served his or her constitutionally mandated term and demonstrated exceptional leadership.

The prize offers opportunities for leaders who left national office to continue in other public roles as well as encourage the citizens to be involved in the leadership debate.