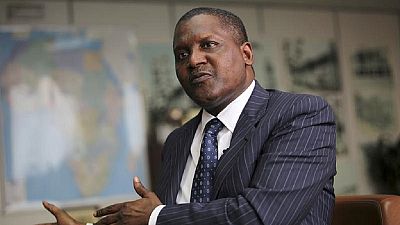 Africa’s wealthiest man, Alhaji Aliko Dangote, has donated a total of 106 truck loads of foodstuffs to be given to people living in Internally Displaced People’s (IDP) camps in Borno State towards the Ramadan festivities .

Governor of the Boko Haram ravaged state, Kashim Shettima, on Wednesday inspected 20 out of the 106 trucks of donated foodstuffs, the donation was made through the Dangote Foundation.

The items which started arriving in the state capital, Maiduguri, include Rice, Sugar, Flour, Semolina, noodles and many others. The remaining 86 trucks are expected to arrive the state very soon.

During an inspection, Gov. Shettima thanked Alhaji Aliko Dangote and his team for standing by the people of Borno state at their time of need and prayed for Allah to reward him abundantly. He called on other well-meaning citizens to emulate the business tycoon.

Borno State in the far eastern part of Africa’s most populous nation was the worse hit by the Boko Haram insurgency that sought to create a caliphate in the region. Until recently, most local governments were under control of the insurgents.

The IDP camps in the state were necessitated by the huge numbers of people who had to flee their homes during the Boko Haram rampage, reports from most of these camps indicate that the state requires support from civil society to effectively help persons living in the camps.