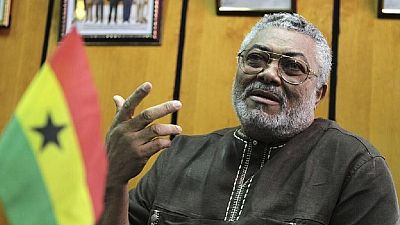 Ghana’s former president, Jerry John Rawlings has lashed out at the government over issues related to environmental degradation, particularly bemoaning the pollution of water bodies and the ‘brutal hacking down of trees.’

The outspoken former military and democratic ruler of the West African nation was speaking at the commemoration of the 37th anniversary of the June 4th uprising that brought him to power back in 1979.

“In our country, the situation has become dire because of the abuse of our water bodies through the dumping of non-degradable wastes like plastics, metals, chemicals and other poisonous materials,’‘ the very outspoken former leader is reported to have said.

Trees that were planted along the Tema motorway to Akosombo road were brutally hacked down a few months ago. Not even the traders who have decided to colonize the shoulders of our urban roads could protect these trees.

Jerry John Rawlings affectionately referred to as JJ Rawlings further bemoaned how rampant illegal mining across the country was threatening communities living along river banks whiles the government looked on.

“It is further exacerbated by the senseless abuse of our rivers and lakes in the new-found craze for illegal mining. It is tragic to see rivers such as Ankobra, Pra, Offin and parts of the Volta which use to provide portable water to huge communities now turn into a flow of mud and grime,” media portal myjoyonline.com reported him as saying.

He cited how trees along a major highway linking the capital Accra to the country’s industrial hub of Tema had been brutally hacked down and warned of dire consequences if nothing was done about it.

“Trees that were planted along the Tema motorway to Akosombo road were brutally hacked down a few months ago.  Not even the traders who have decided to colonise the shoulders of our urban roads could protect these trees,’‘ he lamented.

Rawlings, Ghana’s longest serving political figure diagnosed the current state of affairs within the context of irresponsibility, lawlessness and poor standard and responsibility of the government.

‘‘Nothing reflects the lawlessness in a country as the neglect of its environment. The protection of the environment is the quickest way for a government or local authority to demonstrate its sense of discipline,’‘ Rawlings charged.

After the 1979 uprising, Rawlings staged another coup in 1981 against a then democratic president before he supervised Ghana’s return to democracy under the current 4thg republic.

He went on to win two presidential terms in 1992 and 1996 before his party lost the 2000 elections, following which he handed over to the opposition New Patriotic Party (NPP) at the time led by John Agyekum Kufuor.

The party he founded, the National Democratic Congress (NDC) regained power in 2008, the two partyies would be facing off in Ghana’s 2016 election later in November of this year.