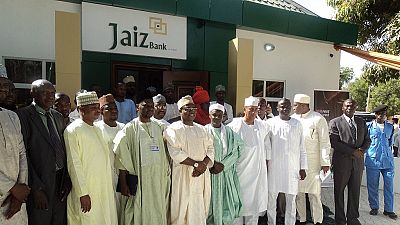 The Central Bank of Nigeria (CBN) has granted the country’s first Islamic non-interest bank, Jaiz Bank PLC, a national license to operate in all 36 states of the federation.

The news of the licence was relayed to the head of Muslims in Nigeria, the Sultan of Sokoto, Alhaji Sa’ad Abubakar III, by the chairman of Jaiz Bank, Alhaji Umaru Abdul Mutallab, who had gone to brief the Sultan on the activities of the bank.

With the feat, Jaiz Bank Plc. has in four years since it began full operations with a regional operating licence from the CBN as a Non-Interest Bank risen to merit a national licence from the regulator.

... being an Islamic bank whatever Jaiz bank does must conform with the rules and regulations of Islam. The challenge to Jaiz Bank is that the real problem starts now.

Having secured the new licence, the chairman disclosed that the bank intended to roll out in all the 36 states and the Federal Capital Territory (FCT) in a few months time. The bank is an unquoted public company owned by over 3000 shareholders spread over the six geographical zones of Nigeria.

Before now, the bank was operating on a regional licence which allowed it to operate geographically in a thrid of the country. Hence Jaiz Bank held branches in Abuja Federal Capital territory, and the northern states of Kaduna and Kano.

Whiles congratulating the bank for the strides it was making, the Sultan admonished the leadership of Jaiz that the ball is now in the bank’s court. He further warned that “being an Islamic bank whatever Jaiz bank does must conform with the rules and regulations of Islam. The challenge to Jaiz Bank is that the real problem starts now.”

Islamic banking, the Sultan said is not just for Muslims but for everybody, adding that it is gaining  traction all over the world.

According to the bank’s website, ‘‘Non-Interest Banking is a profit growing global phenomenon practiced in nearly 70 countries all over the world including, United Kingdom, Canada, United States of America, United Arab Emirate, Malaysia, China, Singapore, South Africa, Kenya etc. Global Banks like HSBC, Citibank, Barclays Bank etc. are also offering it. It is an alternative financial service offering which is open to all irrespective of race or religion.

It is based on ethical principle of fairness, transparency and objectivity. Non-Interest Banking offers almost all the services offered by conventional banks except that they do not give or receive interest, nor finance anything that is harmful to society like alcohol, tobacco, gambling etc. It also seeks to avoid gharar- speculation, uncertainty deception and more,’‘ it added.

The bank got its regional licence from the Central Bank of Nigeria on the 11th of November 2011 and begun full operations as the first Non-Interest Bank in Nigeria on the 6th of January, 2012.