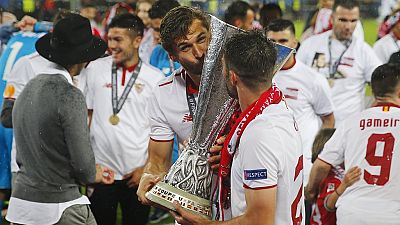 Sevilla boss Unai Emery says the Europa League is “our competition” after lifting the trophy for the third time in a row on Wednesday night after beating Liverpool in Basel.

Sevilla extended Spain’s dominance of European competition with Unai Emery joining Giovanni Trapattoni as the only manager to have won the Europa League, or its predecessor the UEFA Cup, three times.

Sevilla fans and the club love this competition and we love it so much, we want it so much, we're very happy we are the champions once again.

According to Unai Emery: “Sevilla fans and the club love this competition and we love it so much, we want it so much, we’re very happy we are the champions once again.”

Sevilla captain Coke, who scored two goals in the final, won the man of the match award for his performance.

“The team has had a great season. We have been able to get back up after falling behind during a tough game. We started OK but they improved and scored a goal and were better in the last quarter of the first half. As to what we felt on the pitch, the coach told us we couldn’t change our plan. We had to trust that,” Coke said.

For Jurgen Klopp the defeat is hard to take but says his side will learn from it.

“We will carry on, I will carry on, and I will be in another final and then you will tell me ‘you lost your last five finals’ and we’ll be prepared for this moment. So I’m not sure I have a good answer but I believe I will try all I have to reach the next final even when I know that you can lose it, so it’s like it is. There are bigger problems in life but in this moment to be honest, it doesn’t feel like this. It’s really hard,” Klopp said.

Sevilla’s success will make Unai Emery a target for a number of European clubs.