No apologies needed but return of assets - Buhari tells Cameron 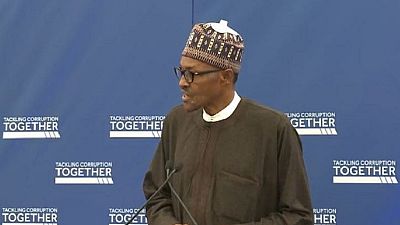 ‘‘No. I am not going to demand any apology from anybody. What I am demanding is the return of assets,’‘ Buhari said whiles delivering the keynote address at the pre-conference for participants at the anti-corruption summit which opens on Thursday.

No. I am not going to demand any apology from anybody. What I am demanding is the return of assets.

The Nigerian leader further added that; ‘‘I have already mentioned how Britain really led and how disgraceful one of the Nigerian executives was. He had to dress like a woman to leave Britain and leave behind him his bank account and fixed assets, which Britain is prepared to hand over to us. This is what I am asking for. What would I do with an apology. I need something tangible,” Buhari added.

He also outlined measures that his government had taken to fight corruption in Nigeria, ‘‘We have implemented the Treasury Single Account whereby all federal government revenue goes into one account. This measure would make it impossible for public officers to divert public funds to private accounts as was the fact before. We have been able to remove 23,000 ghost workers from our payroll thereby saving billions that would have been stolen.”

The Anti-Corruption summit will open on Thursday but it would be preceded today (Wednesday 11 May) by a conference for leaders in civil society, business and government who are championing the fight against corruption.

According to the official UK government website, ‘‘the summit will seek to galvanise a global response to tackle corruption. As well as agreeing a package of actions to tackle corruption across the board, it will deal with issues including corporate secrecy, government transparency, the enforcement of international anti-corruption laws, and the strengthening of international institutions.’‘

The summit will pool together political leaders, business and civil society to agree on a three pronged package among others:

Nigeria’s Buhari and Afghanistan’s Ashraf Al Ghani, will be joined by the Colombian President Santos, Norwegian Prime Minister Solberg, the US Secretary of State, John Kerry and other global leaders including the IMF officials.

The British Prime Minister on Tuesday described Nigeria and Afghanistan, as countries that were ‘‘fantastically corrupt’‘.

Cameron’s comments were made during an audience with Queen Elizabeth but they were followed by the Archbishop of Canterbury, who at the same forum was heard saying Buhari himself was not corrupt.

“This particular president (Buhari) is actually not corrupt…He’s trying very hard,” Justin Welby is reported to have said.