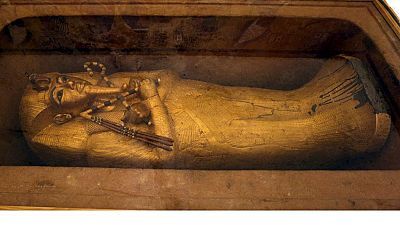 Archaeologists are fighting over what may or may not lie hidden beyond the walls of Tutankhamun’s burial chamber in the valley of the kings in Egypt.

The chamber is famous for the wealth and valuable antiquities it contained.

“If I’m right in my understanding of reading of the evidence to suggest there may be a burial of Nefertiti behind the north wall, surely that’s worth going the extra mile. But you know, I haven’t got a crystal ball, I don’t know, I don’t know what the future holds in store,” he said.

News from Egypt seems inconclusive as to the possibility of further spaces in #Tutankhamun's tomb… pic.twitter.com/NtyKPagvbU

At a conference held in Cairo Reeves clashed with the Egyptian Antiquities Minister who completely rejects the theory.

“I believe we should not close the subject, because Reeves could say: “the Egyptian government did not give me the opportunity to prove my theory”. I asked and I did announce that we need a third radar and that third radar should go to the tomb and make a survey,” former Antiquities minister, Zahi Hawas said.

Scans of the tomb are set to continue but Egyptian authorities say they would not allow any physical exploration unless they can be “100 per cent sure there is a chamber behind the wall.”