Algeria's Constantine completes its tenure as 'Capital of Arab Culture' 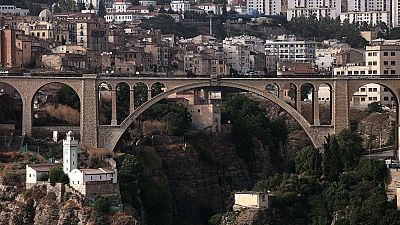 Algeria’s ancient city of Constantine celebrated the end of its year as the Capital of Arab Culture this week with street celebrations showcasing the music, dance and the long-cherished equestrian traditions of the Arab world.

Thousands of people flocked to the city’s main square on Saturday to watch a parade celebrating the country’s varied folklore and culture.

The festival’s commissioner, Lakhdar Bentorki, said it was a proud moment.

This event has brought us the culture of other provinces and other cities.

For the residents of Constantine, the celebrations have opened the city’s doors to visitors, brought business and life to the city, and exposed its residents to cultures from around the world.

“This event has brought us the culture of other provinces and other cities.”

“Culture brings us many things that we wouldn’t otherwise know, and we have got to know them today. What’s important is that it was a productive year and Constantine has been restored. The city has benefited in may ways,” said local resident, Saber, who came out to watch the parade.

After the Arab Organisation for Education, Science and Culture (ALECSO) declared Constantine the Capital of Arab Culture, the city underwent major renovations to its historical, cultural and heritage sites, in preparation for an influx of tourists and visitors.

Throughout the year, Constantine hosted a variety of musical performances by famous Arab singers, as well as theatre and cinema productions from some 26 different countries from across the Middle East, Asia and Europe.

With the year now over, Constantine has passed the baton to the Tunisian city of Sfax.

Festivities to mark the start of the Capital of Arab Culture in Sfax got underway on April 19.