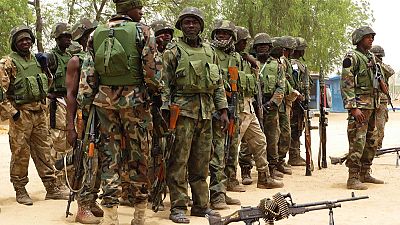 The Nigerian Army has announced that its troops deployed on the ‘Operation Lafiya Dole’ – Operation Peace By All Means – together with some civilian Joint Task Force members in the Borgozo-Alargano general area have discovered a large cache of arms concealed by Boko Haram terrorists.

This was contained in a press briefing at Biu in Borno State, addressed by theater commander of the operation Lafiya Dole, Maj Gen Leo Irabor.

‘‘The troops discovered large cache of arms and ammunitions that include 36 boxes of .51mm calibre, 5 × 20 Lyra beefcake mixture of 7.62mm (NATO) ammunition, large quantity of 7.62mm (Special), ammunition and one 81mm mortar tube,’‘ he added.

Earlier on Saturday, the Army also reported that during a dawn swoop on the terrorists in hideouts at Biggoro, Warpaya and Aura, North of Kumshe in Bama Local Government Area had found an underground storage facility where the insurgents stored food, ‘‘To also save for the rainy day, the terrorists had underground food storage facilities where they stocked large quantity of foodstuffs’‘ the Army’s statement read in parts.

‘‘The surprised dawn attack yielded positive result as the troops discovered well concealed observation posts on trees in the villages constructed by the terrorists to give them early warning of troops movement or approach.

In addition the troops found out that the observation posts though tree tops, were constructed in such a manner with chairs and ropes to pull up foods and other needs by the sentry without necessarily coming down the trees,’‘ it further revealed.

The Army killed two terrorists and recovered some ammunition during the attack. The Nigerian army have intensified its onslaught on the Boko Haram sect following the coming to power of President Muhammadu Buhari last year.

The Army insists that it is winning the battle with the insurgents increasingly deserting the Sambisa forest and other hiding places. They have also managed to arrest key members of the sect after publishing the photos of some 100 most wanted members.

Citizens are now returning to areas that hitherto were held by Boko Haram after the Army has guaranteed them safety. The hardest hit States in the insurgency are Borno, Yobe and Adamawa States all in the north east.