The movie "Criminal" premieres in London 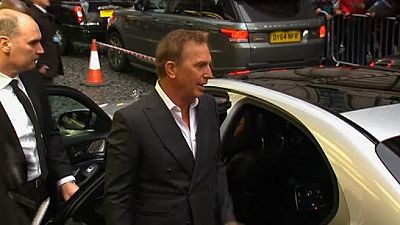 The movie sees Costner playing ex-convict Jericho Stewart who has the memories and skills of dead FBI agent Bill Pope (Ryan Reynolds) transferred into his brain by a neuroscientist played by Tommy Lee Jones.

Most of the film was shot on location in London with a number of set-piece stunts taking place with the British capital’s landmarks as a backdrop. “I think this was an appropriate place to show it because we were all over the place — literally all over this town. I don’t know it the way you guys do but I was charmed by it,” he said. Asked about what drew him to the film, Costner said: “The level of violence and spontaneity that was, that was kind of authentic that I thought that I would try to bring to it, you know the look. It’s not something on paper I think someone attaches my name to, just when you read the thing, you know. But there was a moment in time when I knew I could play this guy.” Asked about what he made of the U.S. Presidential race and Donald Trump in particular, he said: “I have a take on politics but right now I am going to deal with the movie so let’s do one thing at a time.” Criminal also stars Gal Gadot as the grieving widow of Bill Pope. She said the very first scene she played with Costner was memorable. “The first day I came on set I had to do a scene with Kevin. And Kevin walked to me and he said ‘Hey, I’m Kevin nice to meet you’ and I said ‘I am Gal, I am a big fan of yours’. He said, I hope you’re ok with it but we’re going to shoot our first scene, I am going to try to rape you right now’. I said, ‘That would be lovely, yes, let’s go for it’ and that was our welcome first day scene,” she said of the shoot. Israeli director Ariel Vromen explained what he thought was interesting about the idea of someone having another’s memories implanted into their brain. “You know, we are who we are because of our memories, so what if we scrap those down and get new memories, then who do we become. So I think that is a core idea for the film. It was a real intriguing point for me to join in. Because I am really… I am carrying some memories from the past, I think you too, so you know if we can scrub those and get some new ones may be we would be better people,” he said. The film will be released in the UK on April 15. Euronews