Congo responds to US concerns over election-related arrests 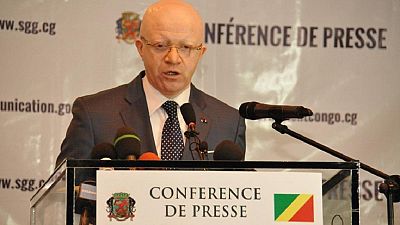 The government made the remarks in response to criticism by the US over the situation in the country since the March the 20th polls.

“There is no arrest linked with the state security . There is no political arrests ,” said Thierry Moungalla, spokesperson of the Congolese government

There is no arrest linked with the state security . There is no political arrests.

“The government of Congo has taken note of the statement from Washington over the election, but finds it difficult to understand how people who have not observed can judge the credibility of the process,” he added.

The US State Department said on Thursday that it was “deeply disappointed by the biased presidential electoral process in Republic of Congo.”

“Widespread irregularities and arrests of opposition supportes which followed the elections marred an otherwise peaceful vote,” it added.

Charles Zacharie Bowao, Coordinator of the IDC-FROCAD, the main opposition party in the country, refuted Moungalla’s remarks and even refered to relatives of some candidates who they say were detained for nearly a fortnight.

One of the presidential candidates, Andre Okombi Salissa on Friday confirmed reports of the detentions albeit not being able to confirm the numbers.

“Forty to fifty supporters or opposition members were arrested throughout the country, since the presidential election,” she said.