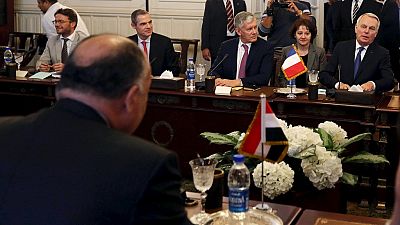 French Foreign Minister Jean-Marc Ayrault on Wednesday launched efforts to revive the Israeli-Palestinian peace process by middle of this year, while ruling out “automatic” recognition of Palestinian statehood.

Paris will not “automatically” recognise a Palestinian state if a French initiative to host an international conference to revive the peace talks fails, Ayrault said on a visit to Cairo.

His predecessor, Laurent Fabius, had stirred Israeli anger in January by proposing such a conference and saying France would “recognise a Palestinian state” if peace talks failed.

“There is never anything automatic. France will present its initiative to its partners. It will be the first step, there is no pre-requisite,” Ayrault said when asked by a journalist in Cairo about Fabius’s remarks.

Ayrault is on a two-day visit to Egypt to discuss the French initiative for hosting an international conference “by this summer” to revive the Israeli-Palestinian peace talks brokered by Washington that collapsed in April 2014.

“What we want, and that is our commitment, is to resume the negotiation process,” he told reporters at a joint news conference with his Egyptian counterpart Sameh Shoukry.

The French initiative comes at a time of mounting attacks since the start of October that have left 188 Palestinians and 28 Israelis dead.

France is worried about jihadist infiltration into the Palestinian territories on the back of “frustration” over the status quo, according to the foreign ministry.