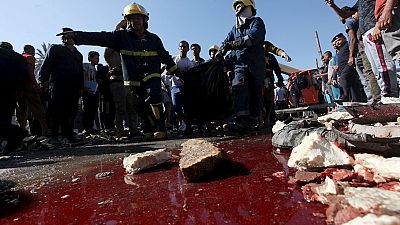 A truck bomb exploded at a crowded checkpoint outside the city of Hilla, south of Baghdad Sunday, killing at least 60 people, officials and medical sources said.

Faleh al-Radhi, the head of the security committee at Babil provincial council, said “the attack was carried against a checkpoint at the northern entrance to Hilla.”

A doctor at Hilla hospital put the number of people killed by the blast at more than 50, including around 20 members of the security forces, and said at least 72 people were also wounded.

A martyr's operation with a truck bomb hit the Babylon Ruins checkpoint at the entrance of the city of Hilla, killing and wounding dozens

Radhi police officers confirmed the casualty toll, the heaviest from any car bomb attack in Iraq this year.

Officials said the vehicle was a truck packed with explosives and was detonated after being pulled over by checkpoint security as it tried to enter Hilla.

Pictures posted on social media showed vast destruction around the checkpoint, where cars are usually bumper-to-bumper at that time of day, lining up to be checked by security personnel.

A doctor at Hilla hospital said at least 11 of the wounded were in a very serious condition.

Militant group Islamic State said it had carried out the attack, in a post on the pro-IS Amaq news agency website.

“A martyr’s operation with a truck bomb hit the Babylon Ruins checkpoint at the entrance of the city of Hilla, killing and wounding dozens,” Reuters news agency quoted the group’s statement as saying.

Iraq has seen a rise in violence in the past month, with suicide attacks killing more than 100 people.