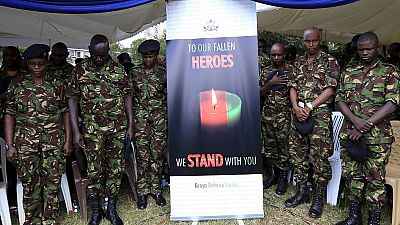 Kenyan troops are reported to have withdrawn from the el-Ade base in southern Somalia where the troops were attacked and killed on January 15.

An army spokesman Colonel David Obonyo has told the BBC the move was part of a “normal operational manoeuvre”.

It is still unclear how many Kenyan soldiers were killed in the attack. But Kenya’s Chief of Defence Forces, General Samson Mwathethe, has vowed to fight the Al Shabaab deep in their hideouts to avenge the death of the soldiers.

The attackers employed massive force to get access to the camp according to General Mwathethe. He compared the explosions to the magnitude of the three bombs in the August 7 terrorist attack on the US embassy in 1998.

According to Kenya’s ministry of defence, the soldiers were attacked by the insurgent group using vehicle borne improvised explosive devices, commandeered by suicide bombers.

This is said to be the worst attack on Kenyan soldiers since they crossed into Somalia in 2011 in the fight against the extremist group.