Aubameyang hits back at Ayew and Toure over CAF Award 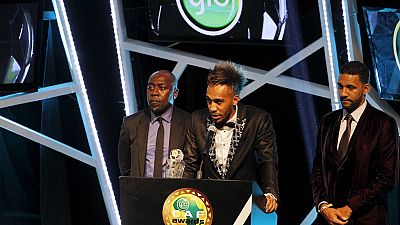 Gabonese international Pierre-Emerick Aubameyang has spoken out against criticisms by the Ivory Coast player, Yaya Toure and Ghana’s Andre Ayew.

The Borussia Dortmund striker who made history by becoming the first Gabonese to win the award after beating off competition from the two (Andre and Yaya) has publicly spoken on the matter.

After missing out on the award, Toure said the decision had brought shame to the game on the continent, while Swansea’s Ayew also sought to question the credibility of the scheme.

Aubameyang says he was hurt by the comments made by his colleagues.

“I was hurt by what was said.”

“The award is based on the whole year and not just the Africa Cup of Nations.”

Aubameyang said he’s spoken with Ayew over the matter and wondered why he made those claims.

“I spoke with Ayew, I did not understand [his attitude]. It doesn’t matter,” he added.

Voted for by coaches and technical directors of nations that make up the Confederation of African Football, Aubameyang got 143 points, against Toure’s 136 and Ayew’s 112 respectively.

The Gabonese figurehead is currently Bundesliga’s top scorer with 18 goals.