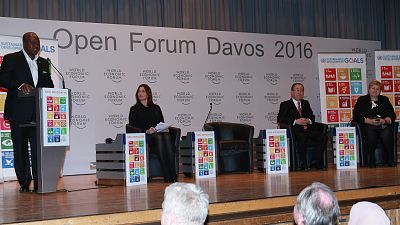 Universal access to energy, education and markets have been identified as a pre-requisite to sustain accelerated growth in Africa.

At the ongoing World Economic Forum in Davos, Switzerland, leaders and economists from Africa expressed worry about the continents ability to find its place in the fourth industrial revolution.

Most Africa countries are struggling to provide uninterrupted electricity supply to citizens and businesses.

“ We talked about the Fourth Industrial Revolution”, but it all starts with the need for electricity, which is like blood in the system. If we don’t have it we cant live.” said President of the Africa development Bank,AfDB, Akinwumi Adesina

“The strategic platform between China and Africa is the best i’ve ever known,” said Desalegn.

“Emerging economies like China and India are no longer more competitive in labour and it is the turn of Africa now,” he added.

Rwanda President Paul Kagame stressed on the benefits of increasing trade within African countries,which only accounts for 11 % percent of trade, currently.

“We know that if we traded more goods among ourselves, we would have a lot of gains, …we don’t have to wait for these changes , but can easily compensate for what we’ re losing overseas by concentrating on what is very close to us and what we can do among ourselves”, said Kagame

The African leaders also talk about empowering rural people, especially women who own most farms lands in rural areas. ‘By helping women link their products to markets, some $300 million in loans can leverage $3 billion in new potential.’