Meet the imagePROGRAF PRO-300 – a high-quality, professional A3+ photo printer with space-saving design 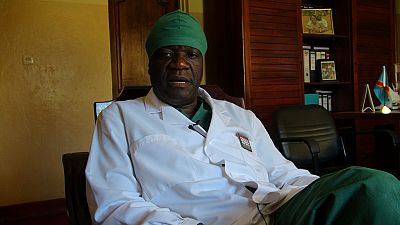 After an initial ban by the government of the Democratic Republic of Congo, French Filmmaker Thierry Michel has finally screened his film about Dr. Denis Mukwege.

The DRC’s Media Minister last year told the AFP news agency that he decided not to approve the film because he believed it was aimed at denting the image of the DRC and its army.

The film The Man Who Mends Women traces the journey of Dr. Mukwege who trained as a pediatrician but later changed to become a gynaecologist realising the devastating impact of the war on the women.

In 1999, Dr. Mukwege set up the Panzi Hospital in Bukavu, South Kivu to provide free and comprehensive care for female victims of rape and other forms of sexual violence.

The treatment for the women integrates psychological and physical therapy with social support to help the victims cope with the stigma, many of them face after they are assaulted.

Over 40,000 women have so far benefitted from Dr. Mukwege’s treatment.

The film screening at the auditorium of Wallonia Brussels in Kinshasa was attended by journalists, leaders of civil society organizations and NGOs as well as students, religious leaders and public and private sector officials.

Director of the film, Thierry Michel said the initial challenges preventing the screening have been addressed.

Dr. Mukwege has gained international recognition and laurels for his work including the Sakharov prize from the European Parliament, considered one of Europe’s most prestigious human rights prizes in 2014.

He is also the recipient of the King Baudouin International Development Prize.