A statement from the Public Ministry said investigators were combing the headquarters in search of documents or information on computer hard drives related to the FIFA case.

CONMEBOL lawyer Cristóbal Cáceres South America’s football confederation said the raid was linked to the case pending in the United States against former long-time confederation chief Nicolás Leoz, who was indicted for corruption and is facing extradition.

“Documents are being solicited, a search warrant was signed by a judge and we, for several months, we have been collaborating not only with North American Justice, but with the courts of Uruguay and with other countries in all matters relating to the investigations so that they can count on the elements that are needed.”

U.S. indictments against 41 defendants, including senior soccer officials from South and Central America, include schemes that involved hundreds of millions of dollars in bribes and kickbacks sought for marketing and television rights.

In parallel investigations, Swiss and U.S . authorities are focusing on whether business contracts and the World Cup hosting rights for 2018 in Russia and 2022 in Qatar were won with the help of bribery.

But the inquiry has since been widened to look at Fifa’s dealings over the past 20 years. The US says the corruption was planned in the US and US banks were used to transfer money.

The headquarters building is on the outskirts of Paraguay’s capital city. 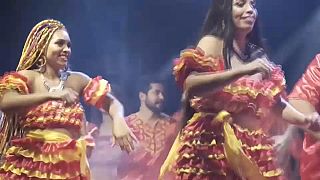 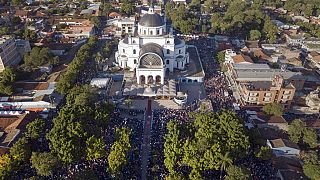 Thousands gather in Paraguay for Virgin of Caacupe Day

Thousands gather in Paraguay for Virgin of Caacupe Day