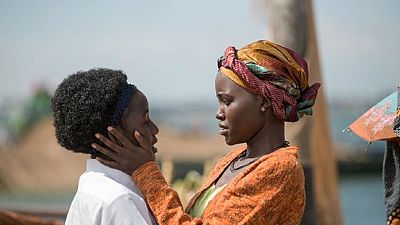 Disney has released the first image for the film, Queen of Katwe.

Based on the novel, “The Queen of Katwe: A Story of Life, Chess, and One Extraordinary Girl’s Dream of Becoming a Grandmaster” by author Tim Crothers, the Disney film explores the story on Ugandan chess mastermind Phiona Mutesi.

In the film due to be released later in the year, Lupita, famously known for her role in 12 years a slave and Star Wars: The force awakens, plays the role of Phiona’s mother and young aspiring actress Madina Nalwanga stars as the prodigy.

The movie which has largely been shot in Uganda has been directed by Mira Nair an Indian filmmaker based in the US.

Phiona is a young lady who grew up in the slums of Uganda. At the age of nine, Phiona joined a chess program run by the a sports outreach institute as she could no longer attend school due to fees.

Having never heard of chess, Phiona is said to have overcome challenges through playing this skillful game.

In 2010, Phiona was selected to represent Africa at the World Chess Olympiad in Russia.