Music is back on the streets of Cape Town. The annual Cape Town Minstrel carnival, also known as "Tweede Nuwe Jaar" or ("Second New Year") has gathered tens of thousands of people on Monday (Jan. 02).

They flocked to participate in the open-air party that returned after a two-year Covid-induced break.

The city’s deputy mayor, Eddie Andrews, was thrilled to experience the return of the festivity.

"There was something missing. I think if you understand the significant cultural aspect of it and the importance why we need to have this event and celebrate what has happened in the past and own our future. I think that is why this event is so important. People camp out days in advance to have front row seats, to tweede nuwe jaar (parade) just highlighting the fact how excited everyone is that it's back now."

About 20,000 performers divided into 27 of troupes marched in the city centre while playing music and dancing. In impoverished, crime-ridden communities with high unemployment rates, joining a band offers some a way out.

Music is what kept Siraaj Allen from taking a more dangerous path when he was a teenager: "I joined the klops (minstrels) and then I saw the trumpet and then I got interested in playing the trumpet. Then afterwards my mother bought me a trumpet and I started to play in the klops (minstrels) and after six years I started studying music and that is where it all happened."

The 30-year-old is now a professional musician. He coaches the Playaz Inc band's which is made up of 150 trombone, sousaphone, trumpet and saxophone players.

Raeed Gallant, the co-director of his band, firmly believes the minstrel have a social role to play in these communities as they serve the youth.

"Most of the klops ( minstrels) are registered as NPO’s , NGOS’s and the amount of giving back that we do for having a klops it's quite substantial because for many of our kids that is part of our klops," Gallant said. "Some of them won’t have any food at home and all of this stuff. So they will come to the klops because we offer a warm meal for them, we offer them drinks, we take them to different areas that they can experience how other people stay in other areas."

The festivity has its roots in colonial times, when slaves -- some of whom originated from Southeast Asia -- were allowed to relax on the day after New Year's Day.

It's now seen as a celebration of the Cape's diverse culture and marks the start of a weeks-long competition where minstrels battle it out for the title of best troupe. 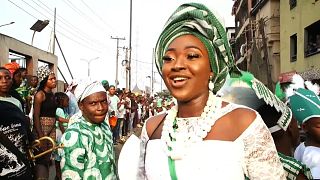 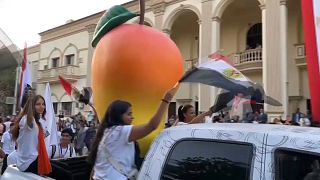 A parade in honour of one fruit: the mango

A parade in honour of one fruit: the mango