Pelé escaped a coup in Nigeria but did he really engineer a ceasefire? 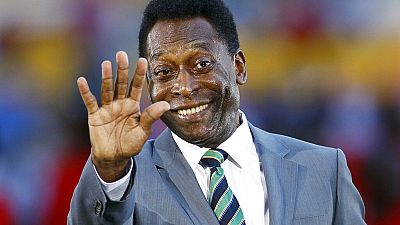 Pelé's long tours with his Santos club and the many trips organised by his sponsors took him around the world, and three of those trips were in the 60s and 70s to the very exciting - perhaps too exciting - city of Lagos, then the capital of Nigeria.

At the beginning of 1969, Santos begins a lucrative series of matches in Africa. At the end of January, the Sao Paulo club arrives in Nigeria to play two games there, despite a very tense situation. Since 1967, the country has been in the throes of civil war following the secession of the eastern region, the self-proclaimed Republic of Biafra. Santos first faces the Nigerian team on January 26. Pelé scores twice in this confrontation (2-2). A second match takes place on February 4, in Benin City, near Biafra, and Santos wins 2-1 against the local team.

The Brazilian legend is that Pelé wants a 48-hour ceasefire between the belligerents before he'll allow this meeting to take place. But Pelé doesn't mention the episode in his first autobiography in 1977. And in another work published in 2007, he confides: "I am not sure that is entirely true, but the Nigerians certainly made sure the Biafrans didn't invade Lagos whilst we were there." He adds that the commercial director of Santos would have assured the players that the civil war would be stopped by the time of the match.

But this version is disputed. In an investigation, Olaojo Aiyegbayo, a researcher of Nigerian origin from England's University of Huddersfield, states that he could find no trace of this mythical cessation of hostilities.

In February 1976, Pelé, who now plays for Cosmos in New York, travels to Lagos again on a trip sponsored by Pepsi. He goes to play a friendly game there and participates in the inauguration of football schools.

But the Brazilian is not the only sports personality present in the Nigerian capital. Tennis players Arthur Ashe and Stan Smith participate in a tournament and stay in the same hotel as Pelé.

On February 13, 1976, General Murtala Mohammed, then in power in Nigeria, is assassinated by armed men. The lead coup plotter is Bukar Dimka, a 33-year-old lieutenant colonel, whose attempt to seize power will be quickly crushed.

But tension remains high in the city where checkpoints have been erected. On February 16, the match between Arthur Ashe, winner of Wimbledon the previous year, and his American counterpart Jeff Borowiak, is interrupted by five soldiers who order the players and the public to evacuate. The tournament participants return to their hotel under protection and leave the country by plane the next day.

But Pelé, who has taken refuge in the Brazilian embassy, ​​will have to wait three more days to escape. The Brazilian authorities then conjure up an escape plan: he is to be disguised as an airline pilot and manages to fly out of  Lagos. It works and he returns safely home.

The Fluminense team are in Lagos where they are scheduled to play a game as part of a tour. Taking advantage of this coincidence, the local authorities propose to Pelé that he kicks off the friendly between Fluminense and the Nigerian team, Racca Rovers.

Quickly, the rumours spread: Pelé is going to play! But despite the denials, the fervour and ticket sales are such that the police eventually convince "the King" to play the match for fear of public disorder. And so Pelé appears after 45 minutes.

In 2018, he jokes about it on his Twitter account. "Once I accidentally played for Fluminense! As a guest of a game in Nigeria, so many people came to see me that the police made me play to keep the peace!" A message accompanied by a photo of the time reads: "Flu had the honour of having the King of Football for a day."