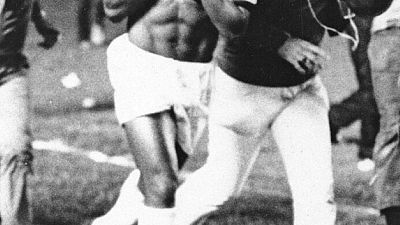 On November 19, 1969, when a broadcast failure deprived the world of the second moon landing of the Apollo 12 Mission, the Brazilians missed nothing of an even more historic moment: Pelé's thousandth goal.

Anf for Brazil and its "king," this date could not have been better chosen to achieve such a feat. On this day, Brazilians were celebrating the anniversary of the national flag in 1889 - and Pelé was celebrating his mother's birthday.

What better gift to offer than this "Gol Mil" full of pride for everyone? Pride for the Brazilians to have the best player and undoubtedly goalscorer of all time; for Maria Celeste Arantes to see her prodigy son enter into legend.

Fate sometimes does things well, it prevented Santos' number 10 from summiting 1000 goals three days before in Salvador. At the end of the match against Bahia, Pelé first saw his shot repelled by the crossbar, and then his teammate Jair Bala took the ball in front of him to score.

It is Rio's mythical Maracana stadium which will be the scene of Pelé's thousandth goal. The cameras may film in black and white, but they work without problem, ready to immortalise the event, in the presence of 80,000 people.

It takes little in the first period for the "King" to score this goal. It was first of all the Argentinian goalkeeper Edgardo Andrada, who would be accused many years later of assassinations on behalf of his country's military junta (1976-1983), who diverted his shot from the outside of the foot. It is then the crossbar, again her, who rejects her other attempt.

"You will not score today," his opponents tease Pelé. Then, when the end of the match is approaching, in the 78th minute, Pelé gets a foul in the area. Although he later wrote in his autobiography that "the penalty is a loose way to score," his execution has never been so difficult to ensure. Because around him, the fever pitch is at its height and the "King" has no right to miss.

For a few minutes, several surreal scenes unfold. Opponents take it in turns to talk to the shooter, just to delay the deadline. Pelé seeming to console himself, hand on the shoulder, the author of the fault. Who see, finally, a last Vasco player, ball in hand, frantically trampling the penalty spot, as if to create a bump there.

Finally, the referee puts the ball on the chalk point and Pelé, calm, hands on his hips, rushes forward. After a "paradinha" - a slowdown in his run at the last moment - he opens his foot and cheats on his right Andrada, who had read his shot well. "Gooooal!!!"

As he runs to grab the ball from the back of the net to kiss it, dozens of photographers, journalists and supporters are already invading the lawn to celebrate the hero. Pele ends up lifted by the crowd, with his precious ball still in his hands, while a cloud of microphones tries to collect his first words.

The moment is solemn only for Pelé's teammates, all lined up on the centre line, who watch without moving the collective outpouring of joy, until Pelé pulls himself out of the mass and comes to jump into the arms of each one. Again carried in triumph by his goalkeeper, Pelé ended up dropping a few words to the media, dedicating his goal "to the poor children of Brazil."

It was then that a jersey was given to him, flocked with the number 1000 on the back. He puts it on, before starting a lap of honour of about twenty minutes, under the incessant cheers of the Maracana.

At the end of all this, it is necessary to finish this match well! But the last ten minutes no longer matter to anyone. Spectators are already leaving the stadium as history has just been written.