The Nigerian National Bureau of Statistics (NBS) reported in its latest consumer price index that inflation rose to 21.47% in November, up from 21.09% in October.

The Bureau ascribed the increase to a combination of factors, including a sudden spike in demand before the Christmas shopping season, higher import costs as a result of the depreciation of the naira, and an increase in production expenses.

Because of the significant reduction in food production, the country's insecurity issues have resulted in an acute rise in food prices.

Prices of basic food items such as rice, beans, yams, vegetables, and poultry products, among others, have steadily increased since July 2020, with millions of Nigerians struggling to adjust.

"Inflation keeps going up and up and it has actually driven Nigerians into poverty," economist Ogunshola Akintune Emmanuel told The Associated Press.

Precious Chinedu, a businesswoman and mother of seven said she had been struggling to feed her family.

Nigeria’s government anticipates that inflation will remain in the double digits, averaging 17.16% next year.

Despite being Africa’s largest economy and one of the continent’s top oil producers, corruption, insecurity, and lack of good governance have caused economic hardship for many.

The need for self-sufficiency in food commodities remains at a very high level across Africa.

Meanwhile, Africa’s food import bill is consistently above $43 billion per year and is estimated to rocket past $110 billion in 2025, according to World Bank estimates.

But economic watchers say if Africa grows what it consumes, then it can see a drastic reduction in that figure. 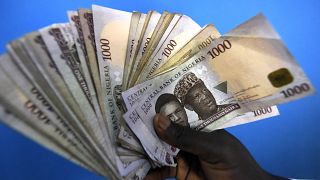 Nigeria restricts cash withdrawal to $44 a week per individual

Nigeria restricts cash withdrawal to $44 a week per individual