Asked what's on her wish list for her tiny clinic, Tchimaden Tafa starts to reel off a long string of items but doesn't reach the end, for another patient has come in, seeking her help.

In Souloufeta, a village in the remote Aiir Mountains of northern Niger, healthcare comes in the form of a building that is all but empty, manned by a nurse lacking equipment, drugs and even bandages.

Tafa's facility amounts to a two-room concrete-walled structure with a barbed-wire enclosure to keep out camels and goats.

One room is used for examining patients, the other is the storeroom, containing perhaps half a dozen boxes of supplies.

There is neither a refrigerator nor lights because there is no electricity. Tafa has to examine patients with the door open, to let in sunlight. There is not even a scale on which to weigh patients.

Often, "all you can do is look at them and observe" their symptoms, the young nurse said with a sigh. "What can you do?"

Niger, a huge former French colony in the heart of the arid Sahel, is the poorest country in the world, according to the Human Development Index.

Its population, the fastest-growing in the world, has per capita GDP of less than $600 per year, compared to $70,000 in the United States, according to the World Bank.

Soulefeta comprises around 100 inhabitants living in around 15 mud-brick homes.

It lies about seven kilometres (four miles) from Iferouane, where there is a bigger health centre -- but in this mountainous part of the Sahara, that distance is long and gruelling.

The roads are rough, and can be washed out by downpours in the rainy season, says Azori Lahou, who drives a four-wheel-drive ambulance.

He takes patients to Iferouane and, if need be, to the nearest hospitals, in Arlit and Agadez.

They are respectively five and nine hours' drive away along desert tracks -- "And that's on a good day," Lahou remarked.

In this vast empty region the size of France, there is just a single tarmacked road. It was built years ago with revenue from uranium mining, but today is almost a memory, eroded by the wind, sand and truck wheels.

The head doctor in Iferouane, Ada Daouda, one of two doctors in the area, said one of his biggest concerns was to get sick patients in a transport-worthy condition so that they could make the long trek to hospital.

"Someone whose vital signs are in danger and who has to wait hours to be treated -- you can imagine what this (trip) is like," he said.

Often, sick people are transported from Soulefeta to Iferouane on the back of a motorbike -- cheaper and more rugged than an ambulance, despite the obvious risks, said Tafa.

The village's health committee is proposing that local inhabitants contribute a total of 1,000 CFA francs ($1.50) per month towards buying drugs for the health hut.

Moussa Ibrahim, a gardener by profession who chairs the committee, said he knew that this sum fell well short of what was needed.

"People are poor and not all of them are able to contribute, but they are doing their best," he said. 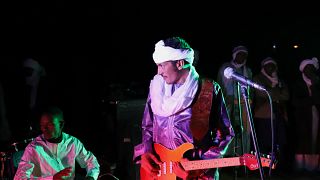