The secretary of the Bar Association in Chad announced lawyers would appeal the prosecution of the October 20th demonstrators.

"They were deported, now they have been convicted and some have been released, so they say? But that does not mean that the procedure was followed. What we are criticising as human rights defenders, as the Bar, is the procedure that has been biased, it's a parody of justice" (...) "So the lawyers are going to have to appeal to get justice. I hope the appeal judges will follow the law", said Koulmem Nadjiro, Secretary of the Bar Association of Chad.

Around 50 people, including 10 members of the security forces, died when police opened fire on demonstrators in the capital, N'Djamena, and several other cities on October 20th, according to an official toll.

Opposition groups denounce the official numbers and say the real count was much higher alleging unarmed civilians were massacred.

The protests had been called to mark the date when Chad's ruling military had initially promised to cede power, a timeline that has now been extended by two years. 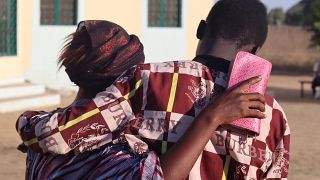