The Democratic Republic of Congo government has criticised Rwandan President Paul Kagame for his remarks on the elections in the country.

The remarks on Thursday come after the Rwandan president had accused his Congolese counterpart Felix Tshisekedi of exploiting the violence in eastern DRC to delay elections.

"I think that President Kagame has no standing to make any comment on what concerns the elections," Congolese government spokesman Patrick Muyaya told reporters, recalling in particular that through a constitutional referendum held in 2015, Kagame had "ensured that he would remain in power until 2034."

"For everything that concerns democracy, worldwide he is the last on the list", added the spokesman and Minister of Communication.

The eastern DRC is plagued by violence from numerous armed groups, including the M23, a mostly Tutsi rebellion that has seized large swaths of territory in North Kivu in recent months. Kinshasa says the rebellion is actively supported by Rwanda - a claim Kigali disputes.

In a speech to the nation, Kagame said Wednesday that the problem could be solved if the DRC, where a presidential election is due in late 2023, did not try "to create the conditions for an emergency situation so that the elections do not take place.

According to Mr. Muyaya, Mr. Kagame's "ambition" is "to destabilize Mr. Tshisekedi politically" so that he will not be re-elected, in order to have someone in power in Kinshasa who will allow him "to continue his policy of plundering" the eastern part of the Democratic Republic of Congo, which is rich in minerals of all kinds.

A five-day truce between the Congolese army and the M23 has held, but heavy gunfire resumed Thursday, and Kinshasa accused the rebels of massacring 50 civilians Tuesday in a North Kivu village. 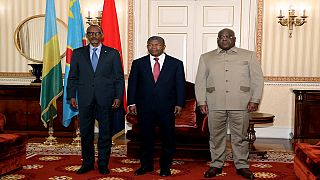