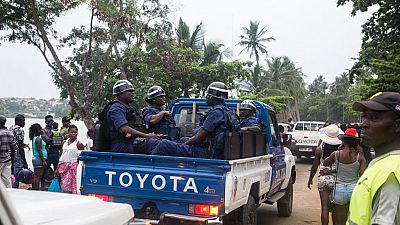 The army chief of staff of Sao Tome and Principe announced on Sunday the death of four people who had been arrested following the failed coup attempt, which the power claims to have thwarted on the night of Thursday to Friday, deaths on which the Santomean justice will investigate.

"Four human lives were lost," said the Chief of Staff of the Armed Forces, Olinto Paquete, quoted by the government news agency STP-Press.

Prime Minister Patrice Trovoada announced on Friday that he had foiled a coup attempt in this small Portuguese-speaking archipelago, considered a model of parliamentary democracy in Africa.

He said a four-man commando was captured on Friday after six hours of firefights at army headquarters. "Four citizens" with "12 army soldiers" tried to occupy military installations, the chief of staff said.

Regarding the four dead, three of them who had been "captured and neutralized" , died of their "wounds", said Mr Paquete on Sunday, without giving further details on the circumstances of these deaths which remain unclear.

The fourth dead, Arlecio Costa, is a former Santomean mercenary from the sulphurous South African group "Bataillon Buffalo", dismantled in 1993 by Pretoria, who had been accused on Friday by Mr Trovoada of being one of the sponsors.

Here too, the circumstances of his death remain unclear: his arrest was announced by the authorities on Friday and, on Sunday, Mr Paquete explained that he died after "jumping from a vehicle", without giving further details.

In this context, a judicial source contacted by AFP indicated on condition of anonymity the opening of two investigations: the first concerning the attack on the army headquarters, the second on facts of "murder" and "torture" against alleged perpetrators of the coup attempt.

At the end of a Council of Ministers held on Sunday, the government "firmly condemned" what it described as a "violent attempt to subvert the constitutional order", while ensuring that "all investigations will be carried out to determine the causes and circumstances of the deaths" , in addition to the investigations to determine the responsibilities of the attempted coup.

The government notably urged hospital services to "properly preserve the bodies" of the victims, adding that an "international team", including a forensic doctor, must join the archipelago to support the teams of investigators.

The president of the Economic Community of Central African States (ECCAS), Gilberto da Piedade Verissimo , and Abdou Barry, head of the UN Office for Central Africa, carried out a "fact-finding mission" this weekend -end in the archipelago, announced the two organizations in a joint press release.

Several other people, including the former number 1 of Parliament, Delfim Nevès , were arrested on Friday after being denounced by the commando responsible for the assault on the army headquarters, Mr Trovoada said after the events.

Mr. Nevès was the president of the outgoing National Assembly and lost this function on November 11 during the installation of the new chamber resulting from the legislative elections of September 25, won by an absolute majority by the centre-right party of Mr. Trovoada, Independent Democratic Action (ADI). "Some do not accept the will of the ballot box", had dropped the latter.

Following several coup attempts, the last in 2003 and 2009, the parliamentary regime asserted itself in this poor archipelago, independent from Portugal since 1975, which allowed several alternations between two parties: the Movement of the release of Sao Tome and Principe-Social Democratic Party (MLSTP-PSD, centre-left) and Mr. Trovoada's ADI