A brawl broke out in Sierra Leone's parliament in Freetown Wednesday (Nov 23) as MPs were in session.

They debated a proposed change to the electoral system to allow for proportional representation in next year's election.

In video footage, representatives from the ruling Sierra Leone People's Party (SLPP) and the opposition All People's Congress (APC) party are seen fighting and throwing chairs.

The opposition claims the move would be unconstitutional when the government backs the plan.

However, for it to be passed, it requires parliamentary approval.

The fight erupted around 1100 GMT and had quieted down by afternoon. According to local reports, the police intervened to calm down the riotous scene and expel disruptive MPs from the chamber.

The June 2023 vote will see President Julius Bio, who was first elected in 2018, contest a second term in office.

Last week, lawmakers passed legislation to introduce a gender quota in all elected and appointed positions ahead of next year's election, which had been a major campaign promise by the president in 2018. 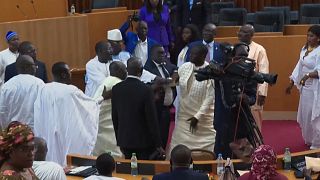 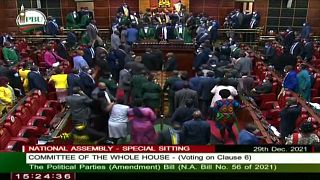 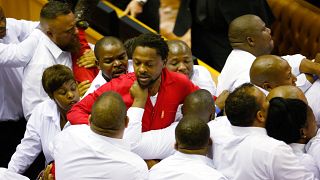