Podcast | Cooking with fonio, the ‘miracle grain’ that aspires to become Africa's quinoa 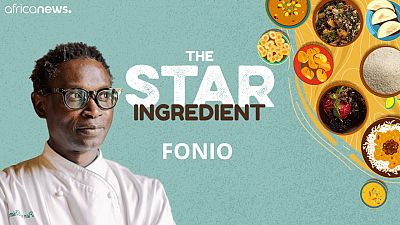 Fonio is drought resistant, climate resilient, matures in the blink of an eye, and a gluten-free, nutritional powerhouse! But you may have never heard of it. Chef Pierre Thiam reveals the first star ingredient of our podcast and shows us how cooking can make the world a better place.

Halfway between couscous and quinoa, fonio is Africa's oldest cultivated grain. It matures quickly in one of the poorest and driest soils on the planet. It's also gluten-free and extremely nutritious. So why doesn't it sound familiar? Why has it fallen into oblivion?

In this episode, award-winning Senegalese chef, Pierre Thiam, shares two of his favourite fonio recipes with us and tells us why he has made it his life's mission to make the world fall in love with this “miracle grain".

An ancestral grain to feed the future

Chef Pierre Thiam first tasted fonio as a child, at his grandparents' home in Casamance, a region in the green south of Senegal. The taste immediately fascinated him. But it wasn't until decades later, when he became an acclaimed chef in the United States, that he was able to explore its full potential.

“This grain is not only great for the environment. This grain is drought resistant. It grows in poor soil, but it regenerates the soil,” he says. “It's like a nutrition powerhouse.”

But to bring this food to the world, Thiam not only had to overcome US consumer resistance to the unknown, but also the grain’s less than stellar reputation in his own country. European colonisers saddled this hardy little grain with the stigma of “hungry rice” and relegated the production of fonio to ethnic groups of southern Senegal.

Chef Pierre Thiam aims to restore fonio to its rightful place, but also to change the status of food sovereignty in Africa.

“I always wondered why Africa is a net food importer?”, he muses. “Africa has 60% of the world's arable land”.

Quantities: According to your instincts. Chef Pierre Thiam does not believe in measurements but in sensations.

How to cook the fonio:

Pour one and a half to two cups of water into a saucepan, as you would for rice.

Bring the water to a boil.

As soon as the water boils, add the fonio to your pot and put it on a low heat.

Let it cook for 3 minutes and the fonio is ready.

How to prepare the salad:

Massage the kale with olive oil and add to fonio.

Add the mango, cucumber and tomato to the kale and cooled fonio.

Use lime juice, a little mustard, a little ginger, salt and pepper to make a dressing.

Add the scotch bonnet or other chili peppers to spice it up.

How to prepare the pudding:

Use a whole vanilla bean if you have access to it (be careful, it may be very sweet).

You can also substitute the vanilla with honey, agave, brown sugar or a date.

Mix with coconut milk and fonio and heat the mixture to create the pudding.

Decorate with cocoa powder, dried coconut or roasted mango and you're done!

Pierre Thiam was born in 1965 to a big multicultural family. He says that the rich flavours of Dakar, the capital of Senegal, marked his childhood. In 1989 he landed in New York and in a twist of fate ended up working in a restaurant as a busboy.

Originally he thought that he would become a chemist, but instead ended up as a renowned chef in New York.

He now lives in California with his wife and young daughter. From there, he runs his restaurant, Teranga and an African food import company, Yolélé. He has published four cookbooks, one of which is devoted entirely to fonio: ‘The Fonio Cookbook: An Ancient Grain Rediscovered’.

The podcast The Star Ingredient was funded by the European Journalism Centre, through the Solutions Journalism Accelerator. This fund is supported by the Bill & Melinda Gates Foundation.