At a joint news conference, Greek Foreign Minister Nikos Dendias said talks with his Egyptian counterpart, Sameh Shukry, focused on the memorandums of understanding between Turkey and Abdul Hamid Dbeibah, the leader of one of two competing governments in divided Libya.

He said such agreements were a threat to regional stability.

The deals, signed last week in the Libyan capital of Tripoli, include the joint exploration of hydrocarbon reserves in Libya’s offshore waters and national territory.

Dendias slammed the deals as illegal, saying they infringed on Greek waters.

The Egyptian foreign minister, meanwhile, said Dbeibah's government has no authority to conclude such deals, given that its mandate expired following Libya's failure to hold nationwide elections in December last year.

He called for the U.N. to take a clear position on the legitimacy of Dbeibah’s government, saying the international body should not keep silent.

Turkey’s agreements with Dbeibah’s government came three years after another controversial agreement between Ankara and a former Tripoli government.

That 2019 deal granted Turkey access to a contested economic zone in the gas-rich eastern Mediterranean Sea, fueling Turkey’s pre-existing tensions with Greece, Cyprus and Egypt over drilling rights in the region.

Dendias said the two ministers also discussed developments in the Aegean Sea, in reference to tensions with Turkey over the alleged deployment of dozens of U.S.-made armoured vehicles by Greece to the Aegean islands of Samos and Lesbos.

There were no immediate comments from Turkey or Dbeibah's government. 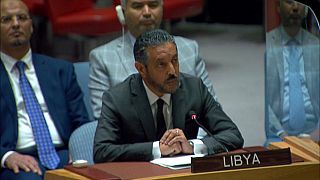