Forms of white supremacy still take place and the world need to make the youth more aware of such racial discrimination atrocities, head of a South African historical monument said on Tuesday. Tuesday marks the International Day for the Remembrance of the Slave Trade and its Abolition. The day was designated by UNESCO to reflect on the history of slavery and to remind future generations to remain vigilant against racial prejudice.

Africans were among those most persecuted by slavery in the world. Cape Town, as the South African legislative capital and the first city founded by Europeans speaks of this painful history. Millions of enslaved Africans landed in South Africa at the Castle of Good Hope, the country's oldest existing colonial building now housing the Castle Military Museum.

The rooms of the slave lodge inside the castle have become exhibition rooms, showcasing the atrocities committed by former colonialists and slave masters against former slaves. "You had to choose between guilty or not guilty or life and death. If you admit to guilt and it is a serious crime, you would either be put under the gallows and be hanged to death or you would be staked alive, you know what staking is? They would put a pole up you and you would hang out to death. The vultures from Table Mountain would come down and peek on your flesh until you are dead, so it's horrific what all the people went through, especially the enslaved people," said Calvyn Gilfellan, chief executive officer of the museum.

Slavery was finally abolished by the British in 1834. Years on, white supremacy and racial discrimination are still prevalent in parts of the world including Europe and the United States today. The death of African American man George Floyd under the knee of a white police officer in May 2020 added a reprehensible chapter into America's ill-famed human rights record. "It is very sad for me as an African and as a descendant of slaves to still see form of supremacy coming now and then, whether it is a white rugby player on the field discriminating against another person of of slave or black descent or whether it is the incident with Floyd in America.

All of those forms of oppression need to be condemned by all of us, and that's why there is for me is where UNESCO and world bodies must make more to make the youth aware [of those atrocities]," Gilfellan said. Former South African rugby player Lindani Myeni was shot dead on April 14 by Honolulu police in April in Hawaii, the United States.

The case has aroused shock and anger in his homeland, prompting protests and calls for justice. His remains were repatriated to his home country last week."We were shocked about the thing that happened to the player of rugby. That is why you want to ask why still we have (been treated) like to be a slave, especially between the White and Black. We can prove that this guy was a player and the police shot the player maybe by mistake without knowing why he shot him [the player]," said Phatuei Sekhkhune, a visitor. The world is being urged to remember the victims of the past so that they may inspire future generations to build just societies. 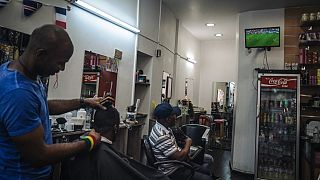