From a makeshift camp below a road in the Afar region, Abdu Robso, a pastoralist displaced by the war in northern Ethiopia, watches, hungry, as food aid trucks climb without stopping towards Tigray, the source of his misfortunes.

"Why is all this food going to Tigray and not feeding us?" asks this 50-year-old man wearing a kofia, with an emaciated face adorned with a white goatee, pointing to some 350 white trucks of the World Food Program (WFP) that are slowly snaking their way.

The route links Djibouti - where international aid arrives - to Tigray, the region where a conflict between the rebel authorities of the Tigray People's Liberation Front (TPLF) and the Ethiopian federal government broke out in November 2020. Cut off from the rest of the country, the region is on the verge of famine.

Like dozens of men, women and children from Abala, a town on the Tigray border, Abdu Robso is surviving on almost nothing in Erebti, a town some 60 km from his home, in temperatures of over 40°C, sheltered by tarpaulins stretched under trees.

The ten thousand or so inhabitants of Abala fled in haste one night in January when Tigrayan forces bombed it from the heights and invaded northern Afar.

Days of walking and then hours in a truck brought Abdu Robso, his wife and several of his 22 children to an IDP camp hundreds of kilometers away.

But since the TPLF evacuated Afar in late April, authorities there have been urging the displaced to return, promising help. "We accepted and here we are with nothing," says Abdu Robso.

At the end of the morning, nothing is cooking on the camp's fireplaces, which have remained unlit. The weakest are sleeping. The children eat some fruit picked from the trees.

"The trucks bringing aid to Tigray pass here. What about us? What have we done wrong? Why is there no aid coming here? We are also hungry," says Aldim Abdela, a 28-year-old shepherd.

"The reason is that Tigray has strong leaders and we don't," says Mustapha Ali Boko, 45, who "feels immense discrimination from the international community.

According to him, the TPLF knows how to mobilize the strong tiger diaspora and the networks built up in international diplomacy during the 27 years the party has governed Ethiopia.

The director of the WFP in Ethiopia, Claude Jibidar, assures us that, in addition to Tigray, "the WFP has always distributed food in Afar (...) we talk less about it, but it continues.

However, in Erebti "some people sleep on an empty stomach" and "there is no medicine", underlines Moustapha Ali Boko: "We have received nothing from the authorities, only from Apda", a local NGO.

For one of the leaders of this organization, Valerie Browning, who criticizes the action of the WFP in the region while admitting a recent improvement, "the Afar have never been taken into account in the calculations of anyone, neither the government of Ethiopia, nor the world.

"No Afar wants Tigrayans to starve, that is obvious. But on the other hand, the world, the Tigrayans and the government of Ethiopia should not want the Afar to starve (...) and unfortunately that is what is happening."

This Australian nurse says she has "never seen such extreme problems" in this region where she has lived for 33 years, where "the humanitarian situation is beyond crisis", with an unprecedented drought adding to the consequences of the war.

At the end of July, the UN reported "particularly alarming rates of food insecurity and malnutrition" in Afar, especially among the displaced.

But how to go home when there is nothing left?

Moustapha Ali Boko and Abdu Robso have just returned from Abala. "Our houses are destroyed and our livestock is gone," explains the former. "The whole town has been looted," says the second.

Abala is a ghost town shrouded in a macabre silence, journalists from AFP noted. The shops are all completely empty. What has not been swept away litters the main street.

The hospital is devastated. Resuscitation equipment, radiology equipment, incubators and beds are rotting outside. Windows, doors, equipment were destroyed, and mattresses were taken away. The storeroom was looted, the generator was torn to pieces.

Only a dozen families live in town. One of them is Ali Mohammed. His daughter was injured during the fighting, he could not flee very far and he found his house where the rebels "took a lot of things".

"The conditions are very hard. The flour is full of weevils, we sift, but (...) it tastes sour. We have no oil or onions, we eat berbere (a local spice mixture) mixed with water," says the 45-year-old farmer.

"I have no reason to go anywhere else, this is my home," he says, but "there is no medicine, no water, we drink the river water and we get sick. 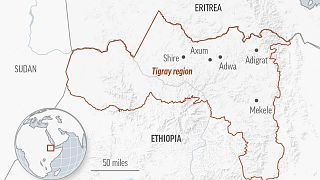